In 1977, John’s grandmother gave him $200 to start his college fund. Instead, John used the money to buy his first 35mm camera, and then he used the camera to put himself through college. He earned a biology degree from the University of Montana, and became an award-winning photojournalist at newspapers in Florida and Montana. By 1982, he was ranked by the National Press Photographers' Association as one of the top newspaper photographers in the United States.

But the frantic, deadline-driven lifestyle lost out to the more humble call of the natural world. Along this path, John worked as a biologist for many years – mostly with the National Park Service – working to conserve California Condors, Bald Eagles, and his favorite -- Harlequin Ducks.

John completed the circle by combining both of his passions -- photography and conservation -- in the form of Fine Art Photography. His images remind you of the natural beauty and humor that is inherent in wild places and wild critters.

He lives with his wife and business partner, Tracy, and their two dogs at the end of the road just past the town of Kila, in northwestern Montana.

(Click on images below for a short, erratic history. Read more history here.) 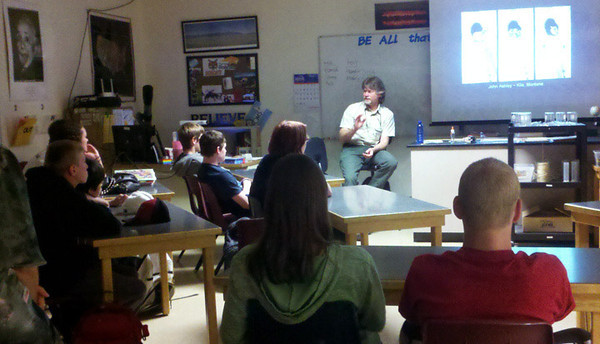